The Pattern – Caught not Taught

I’ve been posting about the Scriptural pattern of living. In my last installment, I talked about allowing God to be involved in our daily lives. If you aren’t interested in the Lord being a part of all that you do, then you’ll never reach your full potential in Christ.

Assuming that you’re reading this because you want to grow in your Christian walk, let’s look at this pattern.

What you heard from me, keep as the pattern of sound teaching, with faith and love in Christ Jesus.
2 Timothy 1:13

Here the Apostle Paul tells the young pastor, Timothy, to continue teaching what was passed on to him. Walking with Christ is not all about some new, exciting fad of teaching. We’re not to go around with itching ears looking for the latest wind of doctrine.

The truths associated with walking out our faith remain constant. Methods, technology, and cultures may change, but our focus must always be upon Christ Himself. The Holy Spirit’s role in the church never changes.

Join with others in following my example, brothers, and take note of those who live according to the pattern we gave you.
Philippians 3:17

This verse brings to light one of the biggest problems in the church of our generation. The pattern of living is not something that can merely be taught. To really understand it, you have to watch someone who’s living it out.

Jesus Christ exemplified what it meant to walk in obedience to the Holy Spirit on a daily basis. The twelve apostles were privileged to watch the Lord and be immersed in that lifestyle. After the resurrection and the receiving of the gift of the Spirit they could walk out what they saw in Him.

It’s clear from Scripture that the same power, authority, and obedience to the Spirit were evidenced in their lives. The miraculous was an everyday occurrence in their ministries.

Even the next generation after the original twelve retained much of that walk. They saw the lifestyle of the apostles and reaped the same results. Unfortunately, the further from the cross we progressed, the more of this knowledge and experience was lost.

At this point in Christianity, God is restoring much that was lost. However, there are very few believers who exemplify the very lifestyle of Christ. It must be relearned from the basics.

There’s no other way for us to pick this up. We must read and study what we can from the pages of Scripture. Then, spend the time necessary with the Holy Spirit to learn how to hear and obey His voice.

That’s why time in the spirit is so important. If I’m to ever live like Christ in this generation, it will be as I’m trained at the Savior’s feet. There’s no quick fix to attain the abundant life.

Question: How important is it for believers to live and minister like Jesus?

Posted by Revzacc on September 9, 2016 in Ministry, Prayer in the Spirit, Revival, Spiritual Walk

I’m posting about how God gathered the mighty men around King David in the Old Testament. There are many parallels to what God is doing in the church today. In my last article I talked about getting over the hurts of the past and moving forward in Christ.

In the book of Acts, chapter 6, we’re told of a daily food distribution to widows. The Greek speaking widows were being left out. What was the result? Did they get offended and leave the church?

No, it became the start of a new ministry. An offence is simply a ministry that someone isn’t doing. In our generation, it seems that we find it easier to leave, than work things out. It’s time to get over your offence and decide to SERVE CHRIST.

Who were the people who showed up to help David?

All those who were in distress or in debt or discontented gathered around him, and he became their leader. About four hundred men were with him.
1 Samuel 22:2

There are others – Christians all around us who are not living up to their potential in Christ. We should be calling them back to fruitfulness. They’re not going anywhere and not accomplishing anything for the Lord.

There are Christians under pressure right now. It’s keeping them from going to church. It’s time to be bold. We must go to these believers.

“God wants you strong in spirit.”

“It’s time to hear a Word from heaven.”

We need an influx of spiritual warriors – this is where it starts. God is calling believers who are under pressure. There’s no better time than now to find them.

Why do we want them in ministry?

Praise be to the God and Father of our Lord Jesus Christ, the Father of compassion and the God of all comfort, who comforts us in all our troubles, so that we can comfort those in any trouble with the comfort we ourselves have received from God.
2 Corinthians 1:3-4

The word trouble in this passage is actually the Greek word for pressure. Pressure qualifies us for ministry. When we can endure pressure, we can help others who are undergoing the same things.

We must call them in. God can and will restore them.

Trouble and distress have come upon me, but your commands are my delight.
Psalm 119:143

David knew the secret to victory in times of pressure. We need to stay in the Word. That’s where we get the strength to overcome.

Question: What are some pressures that God gave you the victory over?

Posted by Revzacc on August 1, 2016 in Ministry, Revival, Spiritual Walk, The Church 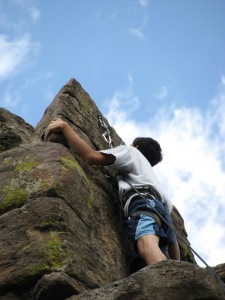 If you’re not facing any challenges, then you’re not living up to your full potential in Christ. That statement is true, whether we want to hear it or not. As much as we’d like a nice easy road, that’s not what the Lord promised us.

“I have told you these things, so that in me you may have peace. In this world you will have trouble. But take heart! I have overcome the world.”
John 16:33

Many Christians would rather bury their heads in the sand than face the truth. We’re in a battle. We’re fighting for the souls of the men and women around us. Most of them are not even aware of what’s really going on in the spirit.

The good news is that Christ has already won the victory. We’re simply a part of the clean-up crew. We’re here to enforce the Lord’s victory on the enemy’s kingdom. We’re to open up the prisons and bring healing to the scarred and hurting – spiritually speaking.

It’s not all about my agenda and what I want to accomplish. I need to yield my life to the will of Christ. After all, He’s the Commander and Chief. He’s the one who gives us our marching orders.

Finally, be strong in the Lord and in his mighty power.
Ephesians 6:10

I might be dating myself, but one of my favorite Sci-Fi movies is The Matrix. It had an interesting concept. Because they lived in a virtual world, if they needed to know Karate, they could just download it into their brain. If they needed to fly a helicopter, they could download that knowledge.

It’s too bad that doesn’t work for us – even though some Christians try that technique in their spiritual lives. We sometimes think that we can do our own thing, then when we get into trouble, we can pray.

Many people find out too late that this strategy doesn’t work very well. I can’t wait for the enemy’s attack, then suddenly learn to resist him. The time to prepare is before the problem.

The “secret” to overcoming is in knowing where our strength comes from. We’re told to be strong in the Lord. That’s where we prepare for the struggle.

That’s why it’s so important to remain in Christ. We need to be a people of prayer, even when everything seems to be going smoothly along. It’s when we’re spending time in the Spirit that we’re downloading the weaponry needed to overcome our future challenges.

I’m only ready for the problems of life if I am resting in the Lord. It’s His mighty power that will sustain me. Take the time to draw from the Lord’s ability. Be strong in His mighty power.

Question: How can God’s power help you in the challenge you’re facing right now?

Posted by Revzacc on May 18, 2016 in Power of God, Prayer, Prayer in the Spirit, Spiritual Warfare